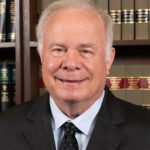 Mark E. Hammons attended undergraduate school at the University of Oklahoma, and received his Juris Doctorate from Oklahoma City University in 1976. He served three terms as an Oklahoma State Representative from 1972 to 1978. Hammons was admitted to practice before the Supreme Court of Oklahoma, the U.S. District Courts for the Eastern, Northern, and Western Districts of Oklahoma, the Northern District of Texas, the Tenth Circuit Court of Appeals, The U.S. Court of Federal Claims, and the U.S. Supreme Court. Mark Hammons is the founder and former President of the Oklahoma Employment Lawyers Association and the head of the Tenth Circuit affiliate of the National Employment Lawyers Association. For 13 years, Mark served on the Executive Board for the National Employment Lawyers Association.  In 2019, he reached the maximum number of years to serve, but stays active in the organization.

Mark E. Hammons, Sr. has been selected to the Super Lawyers List for 14 consecutive years. This places him in the top 1% of attorneys selected in the state of Oklahoma.